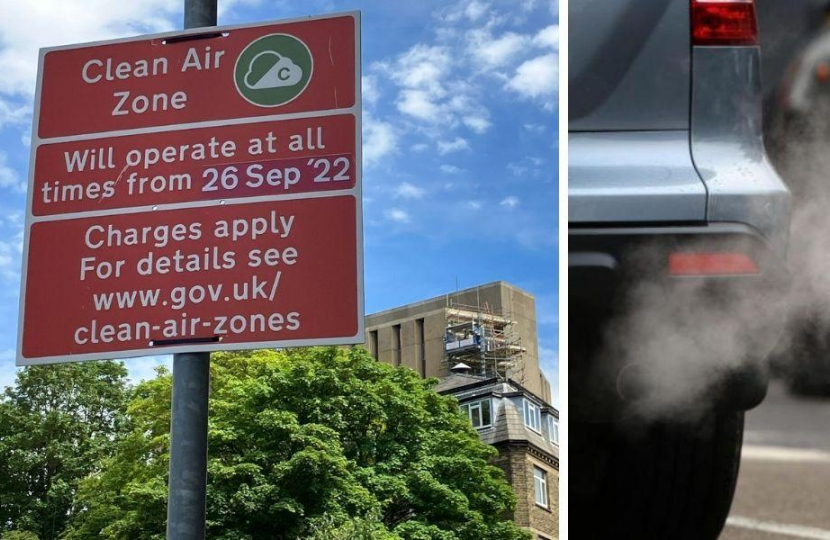 Bradford City Council’s long delayed but impending implementation of a regressive anti-business, anti-vehicle and anti-district tax in the form of a Charging Clean Air Zone that will encompass not only Bradford but also extend to the Aire valley corridor, Manningham Lane/Bradford Road and the Canal Road area, including Shipley and Saltaire is another slap in the face for our community and local economy and evidence of their anti-motorist agenda.

Bradford council will charge non-compliant HGVs, coaches and buses an eye-watering £50 every time they enter the zone: minibuses and LGVs will be charged £9, whilst Hackney Carriages and Private Hire Vehicles will be charged £7 each. Whilst privately owned cars are currently exempt - and the Council claim will never be included in the scheme - I certainly wouldn't put it past them to expand this scheme in the future to include vehicles used by people to travel to work or to drive their children to school, as is the case in London where private cars are charged £12.50 daily to enter their congestion zone.

For non-compliant taxis driving in Bradford every working day of the year, they will be charged more than £1700 a year for the privilege, an excessive amount that most will not be able to afford, leaving Bradford and the surrounding areas lacking access to transport as well as destroying the livelihoods of our hard-working cab drivers. Taxis account for 10% of all vehicle movements in the city, they are an essential part of our transport ecosystem. After suffering hard from the effects of the lockdown due to coronavirus and still attempting to recover, Bradford Council are willing to inflict even more financial damage on the sector for no good reason – and all during a cost of living crisis.

The Government has gone out of its way to make clear that a charging clean air zone is not necessary nor even their recommended solution.

Whilst Bradford Council have claimed on several occasions that the directive to implement a charging Clean Air Zone came from Government, a letter from Andrew Jackson, Head of Joint Air Quality Unit at the Department for Transport clearly contradicts this. On 12 March 2019 he wrote to the council stating that “given the potential impacts on individuals and businesses, when considering between equally effective measures to deliver compliance, the UK Government believes that if a local authority can identify measures other than a charging Clean Air Zone that are at least as effective, these measures should be preferred.” Clear evidence that the Government are not the ones forcing this outcome.

This response was again repeated in July 2021 when I asked the Government for the reasons for the implementation of a charging clean air zone they responded with “it is for local authorities to determine what the appropriate solution is for tackling NO2 concentrations, reflecting the highly localised nature of the problem. In some cases, local authorities will determine that a Clean Air Zone (CAZ) is the intervention required. However, given the potential impacts on individuals and businesses, when considering between equally effective alternatives to deliver compliance, Government has been consistently clear that if a local authority can identify measures other than charging zones that are at least as effective at reducing NO2 to legal levels but with less of an impact, those measures should be preferred.”

It is therefore evident that its implementation is clearly an attempt by Bradford Council to push forward their regressive anti-travel agenda and not simply following Government directive as they claimed.

Indeed there is little evidence to suggest that Bradford Council have properly explored the alternatives to a charging zone.  Instead they have put their blinkers on, determined to implement this tax that will harm the local economy and businesses whose transport will become more expensive, driving up prices for all consumers.

The council should follow the lead of the Mayor of Manchester Andy Burnham who has scrapped plans to implement a charging zone, instead seeking to introduce a non-charging zone which would rule out daily charges but would offer government funded grants to those driving non-compliant vehicles to be able to upgrade. Nearer by, Leeds Council also abandoned their plans to introduce a similar zone. A charging clean air zone is not the only solution, let alone the recommended solution.

Improving air quality does not have to arrive in the form of an unfair tax on hard-working people and businesses. The fact is, that this policy will simply increase air pollution and congestion outside the zone as drivers take different routes to avoid charges.

I urge Bradford Council - even at this late stage - to reverse these anti-motorist decisions for the sake of our community, economy, and businesses.  Indeed if they are so embarrassed and ashamed of the policy that they won't even admit it is their proposal then they really do need to scrap it without delay and put this hare-brained scheme out of its misery once and for all.