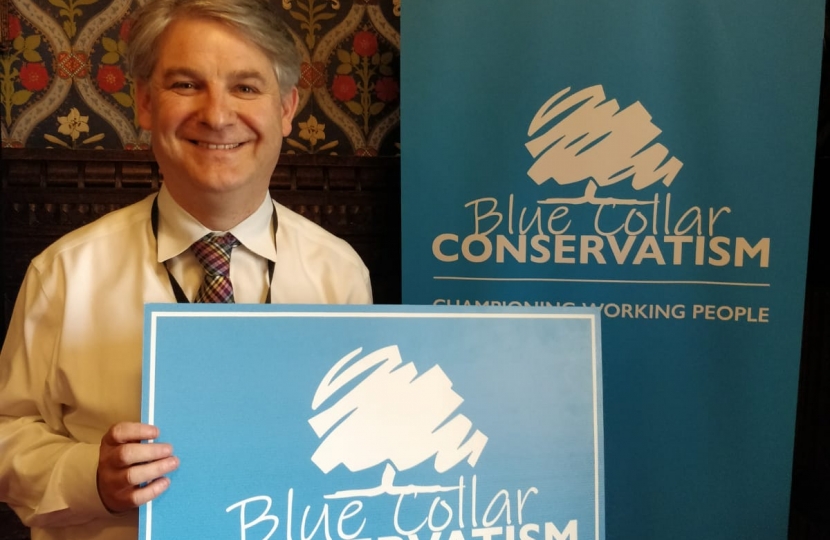 A group aimed at starting a conversation to develop policies for the Conservative Party in a post-Brexit Britain was launched today in Westminster, supported by Shipley MP Philip Davies.

Blue Collar Conservatism is about championing working people and developing an agenda that benefits communities.

Led by Tatton MP Esther McVey the group, which has attracted the support of nearly 100 MPs already, wants to give regular people a voice and refocus the debate on issues such as health, education, policing, transport and infrastructure.

As well as asking for people to get in touch the MPs will take the message to all parts of the country and hold meetings in pubs – starting with the Brown Cow in Bingley later this month.

At the launch Ms McVey called for extra £4 billion for education and £3 billion for community policing and urged members of the public to have their say on what matters to them.

Mr Davies said: “I am delighted the first stop on the tour will be Bingley. We have so much to offer in this area but there is always more to be done.  I have always said it is ‘your interest not self interest’ and this project is about making sure people have a say. Education and policing are two issues that repeatedly are raised with me and I have set out concerns in Parliament about the increase in levels of crime across the Shipley constituency and said we need to be supporting our Police officers, giving them the resources and powers they need to do their job and keep our streets safe. Our schools and colleges need money and people want to know their children can go to a good school and get a good education.

“People also want to see improvements in infrastructure, especially getting the go-ahead for the Shipley Eastern Bypass, which will make a huge difference to the area in terms of congestion and boosting the economy, and improving our local train services, not things like HS2. These are things that matter to people and we need to be delivering on. It is about listening to people and finding out what their priorities are and how we can develop an agenda to make it happen and deliver a better life for them, their families and our communities.”

Mr Davies believes – as does Ms McVey – the additional £7 billion money should be found by reducing the amount spent on overseas aid to its 2010 level of £8.5 billion and scrapping the ring fenced 0.7 per cent of GDP which has seen overseas aid spending almost double in less than a decade.

Ms McVey said: “What people want is for us to deliver Brexit and then deliver policies that matter to them and their families. Brexit is important but people want us to be talking about domestic issues too. We need to get out there and engage with them and that is why I am launching Blue Collar Conservatism. Now is the time to reach out and listen and hear what people have got to say, what they want money spent on, and we need to deliver it.

“People want to know that their street is safe, want their children to go to a good school, want good NHS services, want to know we are tackling knife crime as well as creating new jobs, reducing unemployment and strengthening the economy and this group is going to listen and push to make it happen.”

Ms McVey also believes BCC will appeal to many sections of society and said someone needs to give hard-working people, let down by Labour, a voice.