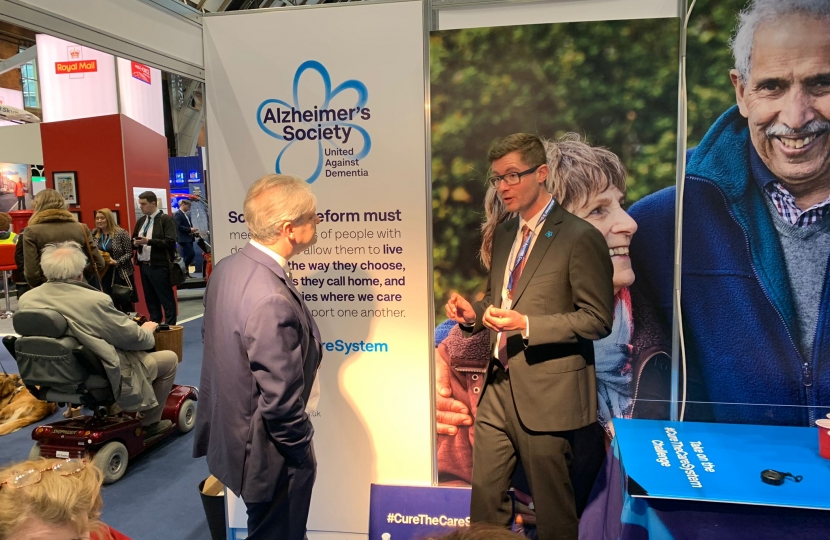 Philip met with representatives from the organisation to show his support to their Cure the Care System Campaign. The campaign wants a future whereby sufferers of the condition can live they life they want, with greater independence, choice and control.

At present there are a limited range of medicines available to treat dementias, such as Alzheimer’s disease. Many people with the condition get support through social care, such as home care or residential care and the charity believe that while there is not yet a cure for dementia, the care system can be changed to better suit the needs of sufferers.

Philip said: “It was great to meet with Alzheimer’s Society at Conservative Party Conference this year and find out how I can best help those affected by this awful condition. I will continue working with them on their campaign to ensure that social care reforms brought forward by Government meet the needs of the 6,020 people living with dementia in the Bradford district, which is projected to rise to 7,970 by 2030.”

In England there are 770,000 people with dementia – a figure set to rise to more than a million in the next decade, according to figures from the charity.

Director of Research and Influencing at Alzheimer’s Society Fiona Carragher, added: “We really welcome Philip Davies MP’s support for our Cure the Care System campaign. Social care reform has been ignored for too long, but that’s changing.

“While there’s still a long way to go, Alzheimer’s Society have a pragmatic, long-term plan for social care that delivers for people living with dementia in Shipley. We look forward to working with Philip to bring about a social care system to be proud of as a nation.”