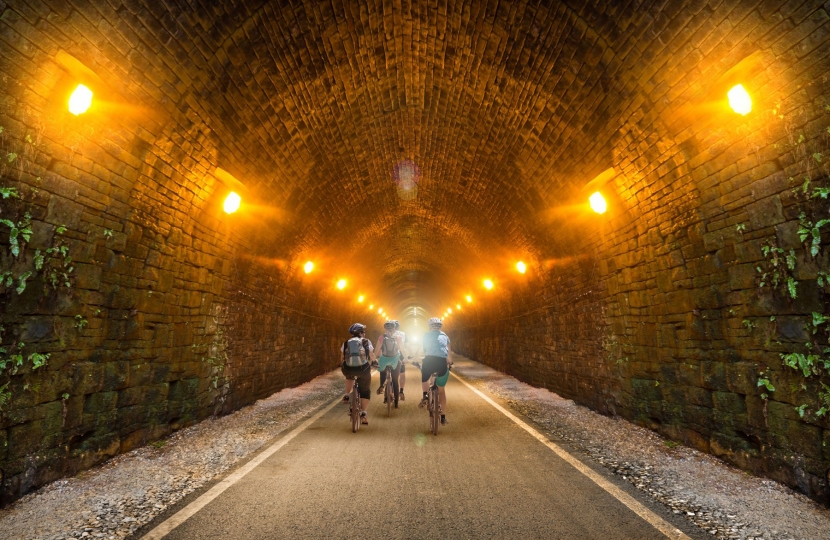 Local MPs have come together to demonstrate their backing for Queensbury Tunnel’s proposed revival as part of a walking and cycling route connecting Bradford district to Halifax.

On Friday afternoon (5th April), Judith Cummins, MP for Bradford South, and Naz Shah, MP for Bradford West - within whose constituencies the tunnel lies - was joined at its northern entrance by Philip Davies, MP for Shipley, and a group of Councillors.

Members of the Queensbury Tunnel Society updated the MPs on the current position with their campaign, buoyed by Bradford Council’s recent decision to formally endorse the proposal to reopen the Victorian structure. In February, officials told the Council’s Executive that, over 30 years, a Bradford to Halifax Greenway - via Queensbury Tunnel - would generate £2.31 in social, economic and tourism benefits for every £1 invested in it. An advocacy document is now being developed to support funding bids for the scheme.

Norah McWilliam, leader of the Society, said: “We’re delighted that more and more people recognise the transformative potential of Queensbury Tunnel, attracting visitors to the area and improving connectivity.

“It’s not just a wondrous feat of engineering; it’s also a key connector that could help us meet our long-term health and environmental responsibilities. We cannot remain reliant on cars for short journeys, but the lack of safe, high-quality cycling infrastructure continues to act as a barrier. We must address that.”

Meanwhile Highways England, which manages the 1.4-mile long tunnel for the Department for Transport, is still progressing plans to partially infill it due to perceived safety concerns.

Phase 1 of its abandonment project, which involves strengthening vulnerable sections of the lining, has been hampered by flooding and is now not expected to finish before the end of May, two months late. Its estimated cost has risen to “at least £1.2-1.4 million”. Phase 2, comprising the main abandonment works, requires planning permission and has a contracted price-tag of just over £3 million.

Philips Davies MP said: “Spending so much money on destroying something with so much potential seems ludicrous. The Queensbury Tunnel would provide a connecting link between the Calderdale and Bradford districts via the longest underground cycle route in the country. We want to promote that and champion the Victorian architecture of the tunnel.”

Judith Cummins MP said: “The Queensbury Tunnel is a great historical asset, and destroying it now is just a convenient solution for the DfT. If the tunnel is sealed, any potential economic benefits from it disappear as well.

“The Queensbury Tunnel Society should be praised for finding a positive use of the tunnel as part of a cycling and walking trail that will be one of the best in the country, which will provide a long-term boost to the local economies of Queensbury, Bradford, and the wider West Yorkshire area.”