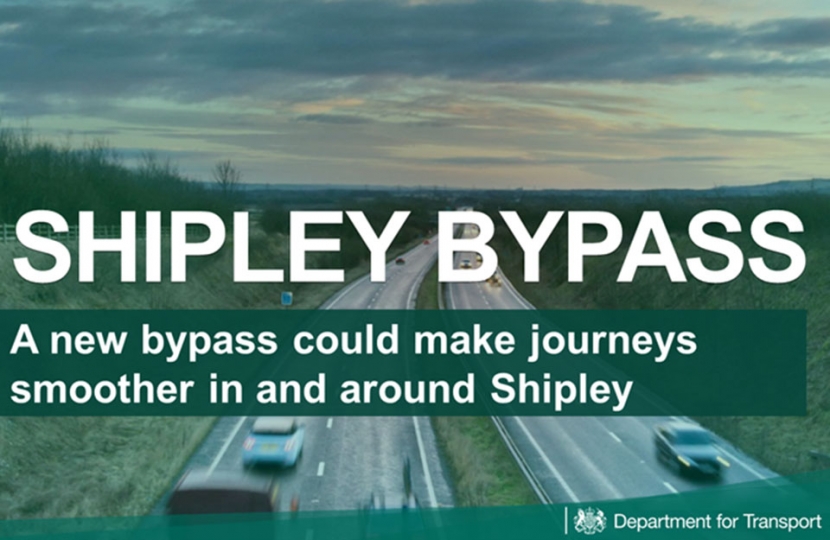 An MP has accused Bradford Council of dragging its heels over plans to create a Shipley Eastern Bypass after being told a feasibility study into the scheme has not started – despite Council bosses previously telling Government it will be finished by November.

The Department for Transport gave Bradford Council £300,000 for the study but according to Roads Minister Baroness Vere, it has yet to appoint a consultant and now expects the report to be submitted next Spring.

Shipley MP Philip Davies said: “I am extremely disappointed the Council is dragging its heels over this much-needed scheme. I can see no reason why the feasibility study has been delayed other than because it is not a scheme for the city-centre and therefore does not take priority. This study should be being finalised ready to be submitted to the department within days.

“My constituents will rightly wonder why Bradford Council is acting so slowly in getting such infrastrucure investment going. It is clear by its actions it does not care about the Shipley constituency and I have no doubt in my mind that if it were a scheme in Bradford it would have been quicker out of the blocks.”

In May, then Transport Minister Jesse Norman said officials at the DfT were in regular contact with the Council and had been told a strategic outline business case looking at how to resolve congestion issues in Shipley would be submitted by November.

Mr Davies learnt of the delay in a letter from Baroness Vere following questioning in the Commons earlier this month.

Baroness Vere said: “The Department recognises the potential benefits of the proposed scheme and has provided Bradford Councill with £300,000 to conduct a feasibility study for a road scheme in Shipley. I understand that the Council expect to appoint a consultant imminently for delivering the study, and they expect to complete that study in the Spring. If the Council and the Department agree that the feasibility study successfully makes the case for a road scheme in the area, the Council will then need to provide a detailed business case for its preferred option, which the department would then carefully review.”

Mr Davies has been calling for a Shipley eastern bypass since it was first mooted in the Airedale plan years ago. He says the area is one of the most congested parts of the UK and schemes such as the bypass should be being prioritised not over-priced projects such as HS2.

He added: “Shipley has huge potential but we need continued investment into local transport links. Relieving congestion through the centre of Shipley with an eastern bypass is a crucial first step as it would allow traffic coming from the east of the town to avoid Shipley and cut straight across to Bradford.”

AN MP has accused Government of pushing ahead with HS2 regardless of spiralling cost – money that would be better spent on transport infrastructure across the north.