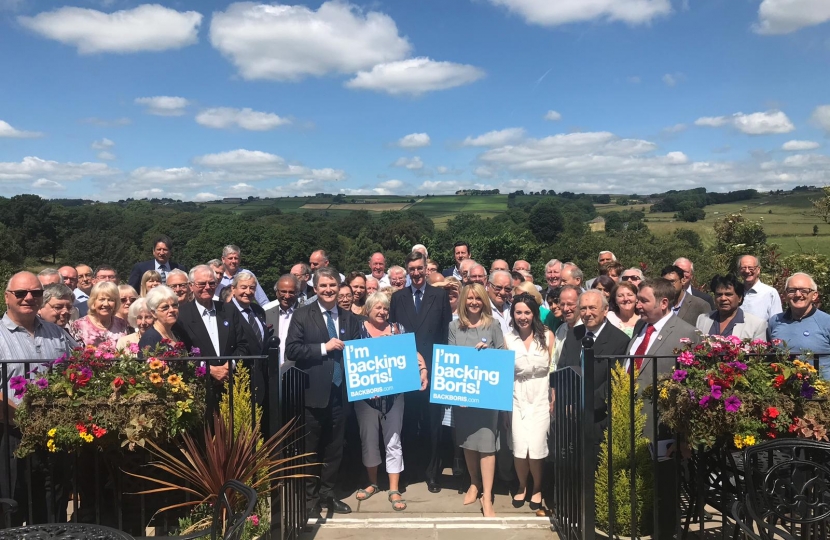 Leading Brexiteer Jacob Rees-Mogg arrived in the Shipley constituency this morning(WED) to rally Conservative Party members to back Boris Johnson to be the next Prime Minister.

He was joined by Shipley MP Philip Davies and Tatton MP Esther McVey at the event held at Cullingworth Conservative Club, which saw more than 100 people pack into a room to hear why Mr Johnson would make the best Prime Minister.

Addressing the crowd Mr Rees Mogg said: “Boris is a man who believes in Brexit and that members should keep that in mind when casting their vote for leader.”

And he heaped praise on hosting MP Mr Davies saying he was “a man of his word”.

The event allowed Party members to ask questions on why Mr Johnson was the best man for the job and issues ranged from stance on a No Deal and criticism of HS2.

Mr Davies said: “I am supporting Boris as he has promised to deliver on the democratic vote of leaving the European Union on the 31 October. He will be a visionary leader and I believe after we have delivered Brexit that he can unite the country and then focus on a good domestic agenda. He has also pledged to support the Blue Collar Conservatism agenda which is about giving a voice back to regular voters, really listening to them and then delivering on policies that matter to people and their families.”