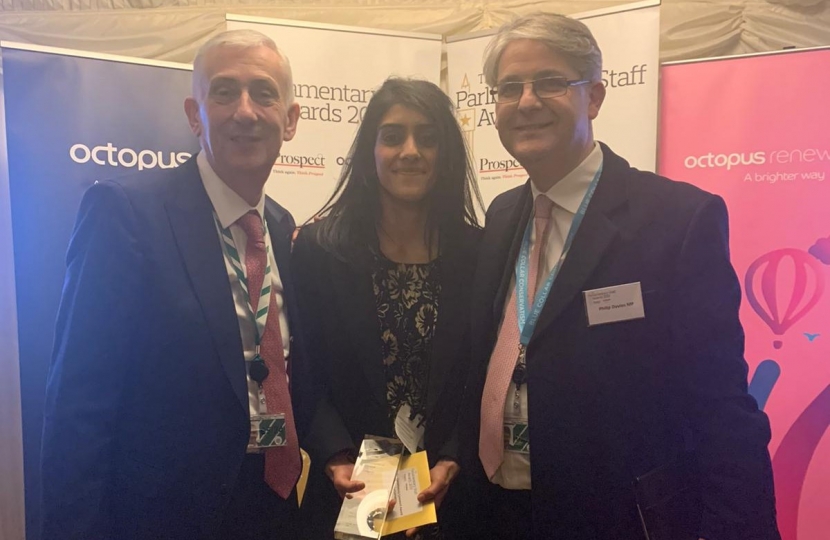 Shipley MP Philip Davies’ caseworker whose job is to help him resolve constituents’ problems has beaten off hundreds of other people to be named Constituency Caseworker of the Year at a Westminster ceremony.

Sonia Johar, who was unaware she had been nominated, was told by Mr Davies she was invited to an awards ceremony in the House of Commons this week, where she won The Constituency Caseworker Award (Conservative) at the Parliamentary Staff Awards.

Mr Davies said: “I am absolutely thrilled for Sonia and this award is so well deserved. She is by a mile the best caseworker I have had in 15 years as the local MP, and she has spent five years working tirelessly for the people of the Shipley constituency. She has a brilliant academic record and is a straight A student and could have taken much higher paid jobs but she applied to work for me and she is amazing as she is passionate about helping my constituents.

“She is like a dog with a bone. If someone is slow in replying she chases them relentlessly until they do reply. If someone is deliberately trying to avoid answering something - or not helping when they could and should - she will not let it go until they give whatever answers or assistance it is that my constituents need. Whereas some people would file some requests in the “too difficult” pile, Sonia is always up for a challenge and my constituents are forever telling me how wonderful she is.”

Miss Johar works in Mr Davies’ Shipley constituency office on Manor Lane and helps with all caseworker, manages the diary and joins the MP at surgery appointments.

She said: “I am absolutely delighted to have won this award – it is a true honour and a great achievement for me personally. I would also like to take this opportunity to thank Philip in particular as well as my friends and family for all the vital support they have provided me with to enable me to successfully carry out this role.

“These awards are fundamental in ensuring Members’ staff are given the recognition they all deserve for their hard work and I would like to congratulate all those that were nominated and shortlisted.”

Mr Davies added: “The overall impact of Sonia’s work is that my constituents get a first class service when they ask for help.

“She has been an enormous asset since day one. Her empathy and desire to do the right thing for all people makes her the perfect fit when it comes to helping local residents and carrying out an invaluable role in assisting me in my quest to provide the best possible service to my constituents.

“Sonia should be rightly proud of winning this prestigious award”

This is the second time a member of Mr Davies’ staff have won an award at the Parliamentary staff awards after Grainne Magee won the Conservative Researcher of the Year back in 2012.