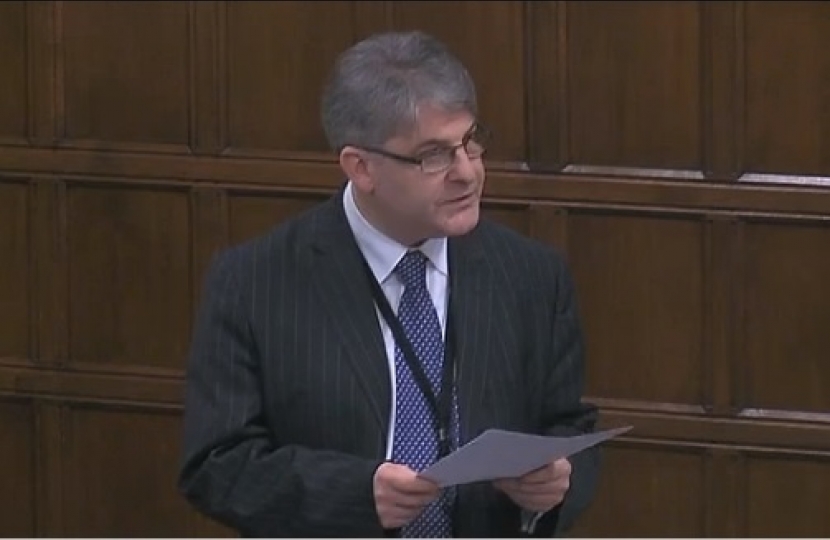 "One of the good things about our last manifesto was our clear commitment to extending the unduly lenient sentences scheme, which was a continuation of our clear commitment in our previous manifesto. I just wish we would get on with it. The scheme has been modestly extended to include some terrorism-related offences, but we need it to cover far more offences.

I regularly criticise the justice system, but one of the good things about it is the ability to challenge sentences that fall outside the normal bounds of leniency. I have successfully used that provision a few times, and I congratulate the Solicitor General, who has done a brilliant job in appealing many unduly lenient sentences with great success.

One recent example of the power of the scheme is the case of Safak Sinem Bozkurt. She was a prison officer who smuggled phones, SIM cards and drugs into prison. She avoided prison because of her children. When the case was appealed, counsel on behalf of the Solicitor General said that her children could not be used as a “trump card” to avoid jail. The judges agreed that the sentence was too lenient and she was rightly sent to prison.

It is frustrating when cases cannot be appealed because they do not fall within the scheme. Ironically, there can be variation where the same offence is charged differently. For example, where someone is charged with sexual activity with a child, their sentence generally can be appealed, but where they are charged with sexual activity with a child while in a position of trust, it cannot be."

"My right hon. Friend is absolutely right, and I am grateful to him for highlighting that point. The inability to appeal a sentence based on charging and not the facts has led to some very low sentences. One example involved a transsexual called Gina Owen, whose case was before the court last year. She pleaded guilty to two counts of causing or inciting a child to engage in sexual activity 12 years earlier, before she underwent sex reassignment surgery. She only pleaded guilty on the day of the trial when the charges were amended.​

Gina Owen was employed as a taxi driver by the local council to drive children to a special school in Somerset. During the six-month period of abuse, I understand that Gina Owen made the victim tie her up in bondage sessions, urinate in her mouth and humiliate her by hitting her then-male genitals. Gina Owen was 61 when the matter came to court and the abuse was of a boy who was around 13.

I raised the case with the Solicitor General, who wrote to me to say:

“The CPS has now considered the amendment to the indictment and concluded that counsel’s approach was wrong. Their clear view is that…he was at all times under the age of 16. Therefore, there was a realistic prospect of conviction for the under 16 offence. This is clearly a more serious offence than the position of trust offence, carrying a maximum penalty of 14 years, as opposed to 2 years. It is also in the unduly lenient sentencing scheme. The CPS’s view is that it would also have been in the public interest to prosecute”—

for that more serious offence—

“notwithstanding the possibility of a plea to the position of trust offences.”

As a result, the defendant received a conditional discharge, which was wholly inappropriate given the circumstances—no punishment at all, to be perfectly honest. What kind of justice is that for the 13-year-old boy who was abused? The whole saga was made worse by the fact that nothing could be done to appeal the sentence because of the charging of that offence. This is an obvious anomaly that needs fixing, and it could be easily done. It is accepted that the scheme has grown in a haphazard fashion and that that has given rise to inconsistencies. I therefore hope the scheme will be widened further.

I also hope, like my right hon. Friend the Member for Hemel Hempstead (Sir Mike Penning), that the time limit for the scheme will be changed, because 28 days is very little time for someone to find out about a case and get their objections to the Attorney General. Sometimes, victims do not find out in time about the sentence or they may not be aware that it can be appealed until it is too late. I know that Families Fighting for Justice supports the change, and I have previously tabled amendments to Bills to try to achieve it. I appreciate that the period cannot be indefinite, but the very strict 28 days has meant that some criminals have certainly evaded real justice.

Jean Taylor, the campaigner from Families Fighting for Justice, has had some terrible examples. People have been convicted of serious crimes such as murder and not been able to have their cases considered again because of the strict 28-day limit. I therefore hope that the Government will revisit the scheme, and I congratulate my right hon. Friend for bringing this matter to the House’s attention."