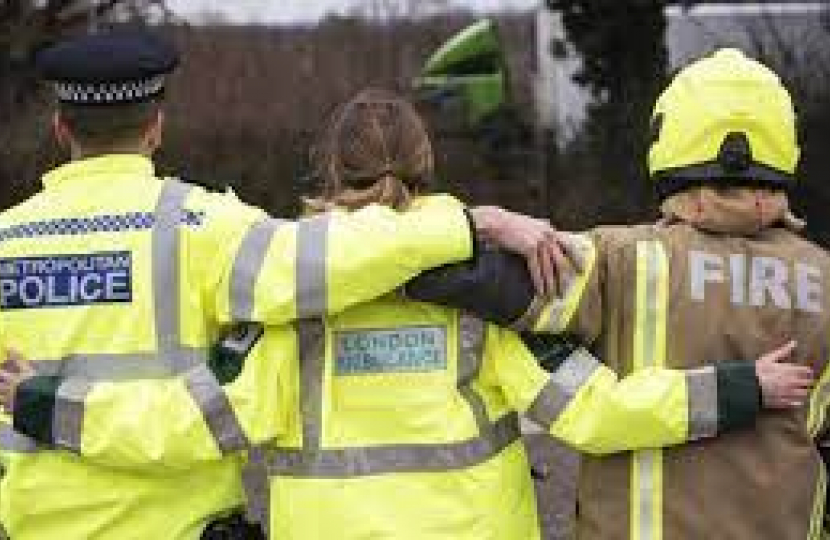 This week we are celebrating the incredible 70 year reign of our Queen.

Whatever people’s views are of the monarchy – and I happen to be a strong supporter - I hope everyone can appreciate the dedication and public service of Queen Elizabeth as an individual.  She has represented the country with huge distinction for so many years, is respected and admired across the world, and the country can come together with pride in our wonderful Head of State. I believe she thoroughly deserves to be very much lauded on her special platinum jubilee.

So, I believe, do emergency workers who continually risk their lives to keep us all safe and well - day in day out, up and down the country.

This is why I am supporting a Police Federation campaign to introduce a posthumous medal for emergency workers killed doing their jobs. The proposed new medal could be called the Elizabeth Medal, after the Queen, and similar to the Elizabeth Cross which is given to the families of bereaved relatives of members of the armed forces who are sadly killed in action.

I spoke recently to Steve Hartshorn, Chairman of the Police Federation of England and Wales. He said that he wanted formal recognition for the brave acts of officers and other emergency service workers especially when they pay the ultimate price whilst they are out there protecting the public.

I also discussed this with Bryn Hughes whose policewoman daughter Nicola Hughes was tragically killed alongside Fiona Bone nearly 10 years ago while thinking they were attending a routine 999 call. They were, in fact, shot by gunman Dale Cregan who had killed before. Nicola’s Dad, a former prison officer, said:

“There needs to be some formal recognition of the sacrifice they made.”

He has also said:

"It doesn't change anything, it doesn't bring people back, but what it does say to the family is there is some recognition for the loss you've suffered.  It says to those families, we are still thinking about you and we recognise the sacrifice that you made….You could wear that medal with pride at a memorial event and that would speak volumes that you are so proud.”

In Bradford, we know only too well the ultimate sacrifices some have made in the line of duty. Sharon Beshenivsky, fatally shot in 2005 after attending an alarm at a travel agents on Morley Street in the city, will always be in our thoughts as will all officers killed doing their job.

Just in the last 5 years alone there have been the tragic deaths of PC Keith Palmer who was stabbed outside Parliament in a terrorist attack in 2017 and in the same year PC Gareth Browning died from injuries sustained by a suspect vehicle he was trying to stop 4 years earlier. There has also been the shocking death of PC Andrew Harper in Berkshire in 2019 when he was dragged along a road by a car whilst investigating a burglary and in 2020 Sergeant Matt Ratana was shot dead whilst detaining a man in a police custody centre in Croydon.

This medal would not just be available to the families of these police officers who were killed doing their job but would actually also cover all emergency workers. The families of prison officers, those working in our fire and rescue services and ambulance crews - amongst others - would be eligible for the Elizabeth Medal if their loved one was killed too.

Parliament has already introduced stiffer sentences for those who assault emergency workers which is something I lobbied hard for, and we must continue to do everything we can to back those heroes who support and protect us and their families.

I am writing to the Home Secretary, Priti Patel, to urge her to introduce this much needed and overdue recognition immediately and I am encouraging other MPs to do the same.

This week’s Platinum Jubilee is the perfect time to support this new Elizabeth Medal – a fitting name for a fitting award – and I hope everyone backs this campaign so that we can make it a reality sooner rather than later, and which would mean so much to the families of those who made the ultimate sacrifice serving us all.