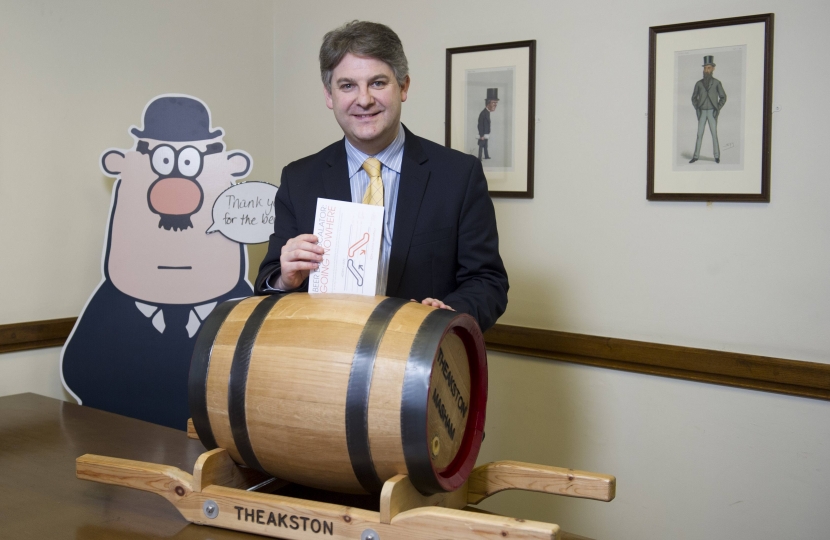 Philip Davies has joined calls for a freeze in beer duty in the March Budget by sending a special ‘message in a barrel’ to the Chancellor at an event in Parliament on Wednesday 27th February 2013.

The hand-crafted oak barrel, an iconic symbol of Britain’s world-renowned brewing and pub industry, is a reminder of how important brewing and pubs are to the Shipley constituency, says Philip Davies MP.

The barrel, with it calls for a freeze in beer duty, was later delivered to the Treasury by MPs and representatives of the British Beer & Pub Association, CAMRA (Campaign for Real Ale) and SIBA (Society of Independent Brewers).

Beer duty has risen by an unprecedented 42 per cent since March 2008, yet the Chancellor plans a further increase in the Budget on 20th March.  The result of the controversial policy has been falling beer sales and pub closures in recent years.

“I strongly support calls for a duty freeze, and I hope the Chancellor will listen. Further tax hikes will close more pubs and cost more jobs in Shipley.

“I want to thank Philip Davies for championing beer and pubs in Shipley.  Beer tax hikes are not raising more revenues for the Government, and with a duty freeze we can create many more local jobs.”

The BBPA’s barrel was specially made for the beer tax campaign by Theakston’s, the legendary North Yorkshire brewer based in the Dales, in the market town of Masham. The company brews many fine ales, such as Old Peculier, one of the country’s most well-known and loved.

The barrel was made from finest oak by Theakston’s cooper, Jonathan Manby. Jonathan is the last apprenticed craft cooper in England and has been cooper at Theakston’s for 19 years, after an apprenticeship lasting four years. This nine gallon barrel is known as a ‘firkin’.